BUILDING OUT THE FUNNY with Lynn Freedman

What makes something funny?

What’s your specific brand of comedy? In what ways are you intrinsically funny and where can you use technique to amplify areas where your comedy falls flat? This class will provide you with tools to understand the various genres of comedy, the techniques and tricks that have been used in the genre to build out the funny, and how your particular brand of funny fits in.

Class size: Limited to 6 students
Prerequisites: Open to all
Location: Online
$400*
*$250 deposit is required to guarantee your slot. Non-refundable, but transferable to a friend.

SATURDAYS
12:00-3:00pm EST
Join Option A
Get on Waitlist
Get Newsletter

WEEK 1: WHAT MAKES SOMETHING FUNNY?

With Lynn, you’ll decipher and explore the concepts of comedy with actors. Senses of humor are so varied, so let’s break it down to basics and find common denominators so that you can articulate what you find funny. This will help you define or sharpen your comedic voice and set you up for bringing your unique sense of humor to any audition or set. In class, you’ll do longform improv exercises. Get coaching from Lynn, including practical tips that you can immediately start applying in class and in future auditions. The class will also discuss loglines as a way of understanding the bigger picture of any comedy script.

Lynn will guide you through nailing down the unique qualities of multi-cam comedy and how it’s different from other forms. Actors will be sent a multi-cam pilot script to read and analyze why certain jokes landed for them. You’ll work a scene in class from this pilot script and find points in the script to reinforce your on-camera choices.

Sitcoms are a different animal! Let’s turn our investigative eye towards the particular rhythms and styles of a sitcom. Actors will again get a script in the sitcom subgenre to study, and you’ll work a scene from that script in class. You’ll continue focusing on how YOUR brand of humor can be highlighted, amplified, and tweaked to shine in any comedy subgenre, either in auditions or in performance.

A favorite subgenre of Lynn’s! Actors will get a dark comedy script to dive into and choose a scene from to work in class. By learning and paying attention to the unique qualities of a dark comedy, you’ll develop your ability to strategically choose moments in the script to draw out humor. Again, the idea is to push forward your authentic comedic voice and leave you with tools that you can use again and again.

Any actors who are inspired to find their authentic comedic voice. And remember, even if you see yourself as a mostly dramatic actor, comedy adds dimension and buoyancy to any scene. This class is also good for actors who are seeking more tools in mindfulness and practical application tips in the work, specifically self-tapes. Lynn is particularly interested in opening up the conversation about the mechanisms at play in the actor’s psyche during self-tape scenarios. Lynn is excited to share her unique perspectives around helping actors slow down, get present, have fun, and feel free. 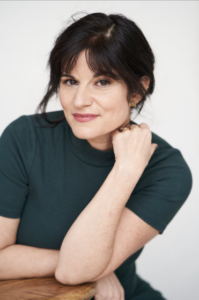 Now based in LA, Lynn Adrianna Freedman was raised in an artistic household in NYC (her father was legendary jazz pianist, Don Friedman) and has been performing since the age of six. She has danced professionally all over the world and acted in over 40 plays Off- and Off-Off-Broadway. She’s worked consistently in film and TV for the past 15+ years, appearing in Her (opposite Joaquin Phoenix), Gone Girl, and guest starring in shows like American Crime Story: Impeachment, Trinkets, FBI, You’re The Worst, Grace and Frankie and more. Lynn plays Madolina Colombo opposite Giovanni Ribisi in the Paramount Plus miniseries The Offer (2022) about the making of Francis Ford Coppola’s The Godfather. In addition, she’s currently in soft prep on her first feature, Montauk, which she wrote and will star in opposite Marisa Tomei and Chris Messina.

Here’s a fun story from Lynn about being on set with Joaquin Phoenix and Spike Jonze:

“Working on Her was one of the most artful, most collaborative, and most peaceful filming experiences I’ve ever had. Spike (Jonze) walked around with an acoustic guitar and would play it beautifully as soon as cut was called. Hoyte Van Hoytema was constantly wandering, searching, deep diving for the best angles for next shots. I was making these awesome sketches and I don’t even draw! Creativity was just in the air. It was palpable.

I played Joaquin’s cube mate at the letter writing company, and on the last day of shooting, Spike came up and whispered in my ear, “What are some words you’d write in a letter?” I thought for a moment, then launched into a passionate story about a woman who had just had her heart broken and wanted violent revenge on her ex.

Spike listened patiently, considered, then said, “Well, it’s not really that kind of movie.” Moral of the story: read the room!”

Lynn is great and so funny herself. She set up an environment where everyone’s funny could shine and be appreciated. We felt like a cast of oddballs by the end that knew what each other did well and encouraged it. There isn’t really a class like this anywhere that specifically addresses comedy in actual tv scripts. This class came at the perfect time.

This note is a very enthusiastic thumbs up to Lynn Freedman’s Zoom class. “Building Out the Funny”. She expertly explained the types of comedies and led class discussions to ensure that we “got it”. She then worked with us individually to help us unlock our own personal comedy super powers by focusing on what we find to be funny.

Not only that, the scene work truly helps us uncover any weak spots in our comedy technique and then to discover/reinforce the steps we can take to shore up our strengths. Our last class is next week and I am so grateful to have had this experience.

Also, kudos to you at the Heidi Marshall Studio for offering this class and in keeping the class size small. It is a winning combination.