Get expert guidance in finding and building the authentic sound of your character.

Meet your goal of crafting a specific and deeply layered character by honing in on your character’s idiolect: the way a particular person speaks, at a specific time, as distinct from others. Tré recently coached Eli Goree and Leslie Odom Jr. under the direction of Regina King. Actors of all backgrounds get to explore a decolonized approach to building authentic dialects and idiolects.

MONDAY
6:00-10:00pm EST
Join Option A
Get on Priority List
Get Newsletter

Here’s what actor Eli Goree said in the L.A. Times about prepping his role of Cassius Clay (Muhammad Ali) in One Night in Miami.

Eli was asked, “How did you work to capture his distinctive speaking style without it coming off as just imitation?”

He said, “It started with what it is to be a Black man from Louisville. That’s where Tré [Cotten, the film’s dialect coach] was hugely impactful for me. Being from North Carolina, he understood what it is to be in the South: the heat, that racist environment, to always have to think before you speak. That’s where it starts. Then you’ve got to be an athlete, you’ve got to know how to talk when you’re moving, when you’re tired, when you’re fighting. Then you put on the Ali-isms. I think a lot of people try to just sound like Ali, just talk in that rhythm. That’s where you can get off base. If you have the right foundation, that’s the key.”* ✨

This workshop is for actors who wish to skillfully shape their speaking for auditions/performances. Goals may include: 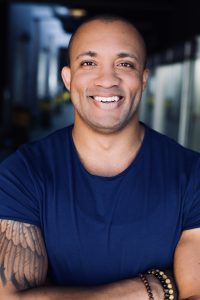 After graduating from The University of Washington’s MFA- Acting program, Tré has been touring the country and the world re-examining and redefining his own voice teaching approach that he has titled, “Freeing the Black and Indigenous Voice: Where does the music of a people meet with heightened text?” Tré has been seen on stages spanning across North America as a performer. He has recently been acknowledged in the New York and Los Angeles Times for his work as Dialect Coach for Regina King’s Directorial debut, One Night in Miami, where he coached Leslie Odom Jr. in his Academy Award-Nominated performance as the legendary Sam Cooke. He is a proud native of Clayton, NC.

Tre’s methodology is designed to decolonize the way heightened text is approached in the performing arts where Jazz and Hip-Hop coexist in the same world with the work of William Shakespeare. Too often, BIPOC storytellers are asked to use European approaches and techniques to truthfully live in imaginary circumstances. This work not only focuses on the musical identity of a culture, but it reads down the dance between the Breath and the Thought by using the language of music as a template. The goal is to push forward and expand the palate of storytelling by, as Toni Morrison so boldly and eloquently teaches us, “[making] sure that the white gaze not the dominant one.”

Tré Cotten got his big film industry break this year in “One Night in Miami,” the first feature directed by Regina King. Mr. Cotten is an expert in voice and speech training and a self-described “research nerd,” adept at seeking out audio recordings and other materials to identify the habits that make a character’s language unique.

He was eminently qualified to help the actor Eli Goree, who plays Cassius Clay in the film, reproduce the rhythms and tones of the boxer’s Louisville sound. Yet many crew members were surprised to see a Black man doing this kind of work — even on a film that recounts an imagined meeting between Malcolm X, Jim Brown, Sam Cooke and the man who would become Muhammad Ali, and which was written, directed and cast by Black people.

[…] “My phone’s been busy,” Mr. Cotten said recently, describing the coaching he’s been able to do via Zoom. “And that’s good, but I want to make sure that I’m not the only one out there. One of the most repressed things for Black people in this country has been our voice. Right now, we’re seeing if we can really find our voice, at this time, and this specific moment, to specifically tell this story — this beautiful thing — the way the team wants it to be told.”

Breathing, Listening, Attention to the details and making a choice.

Make it about the work.

What frustrates you as an actor in the current climate of filmmaking or of the business at large?

The Global Majority of Artists given opportunities, but not the resources to succeed once in the room of opportunity.

The moment before because in the moments before its between myself and the Source.

In my field, I look up to the actors who approach the work with bravery with each story they tell.

Why did you choose THIS class to teach?

Heidi’s and my belief in what she is doing in educating storytellers and how it relates to the screen particularly.

The overall experience was great. I felt like another side of approaching a character was introduced to me. I felt that I got to scratch the service of discovering how to apply Idiolect to the work.

I loved the intimacy of the class and the safe space Tre encouraged.