Approach your TV auditions with more precision, nuance, and individuality. Focus your effort and energy into making smart choices so that your auditions feel more efficient and creative.

Learn the nuances of what each TV role requires so that you feel rooted and secure in your character’s journey, no matter how many lines you have. Marry the script to your natural instincts and use what you authentically bring to the table to easily set yourself apart from the hundreds of other actors auditioning for a role.

Class size: Limited to 6 students
Prerequisites: Open to all
Location: Online
$400
*Full payment due upon registration. Non-refundable, but transferable to a friend. "Pay in 4" may be available through PayPal if you qualify.

TUESDAYS
6:00-9:00pm EST
Join Option A
Get on Priority List
Get Newsletter

This class is a 4-week marathon in confidence building! We’ll study all types of TV roles—co-star, guest star, series regular, and lead—and you’ll come away with tools to apply to any TV audition or performance scenario. Each role serves the story in a different way, so let’s get specific about what those nuances are.

BUILD THE ARC FOR THE GUEST STAR

ANCHOR THE SERIES REGULAR WITH YOUR NATURAL NUANCES

WORK THE LEAD WITH CONFIDENCE

You”ll need to watch the TV show that you are studying! (It’s so fun to deep dive into one show!) You will also need to plan for homework time to research your assignment, prepare your materials, and practice your self-tape set-ups. All studio classes are designed to stretch and support your complete prep process as an actor for self-tapes and in-person auditions. The more you put into the class, the more you get out of it! 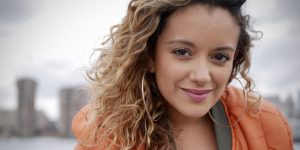 Athena Colón is a bilingual, native New York actress, teaching artist and acting Coach. Athena has worked as an independent teacher and coach in New York City for 10+ years. She has trained with former Telsey + Company casting director Heidi Marshall as a coach and joyfully prepares actors for screen tests and auditions. She is the recipient of the BRIO Grant from the Bronx Council of the Arts. While earning her BFA in Theatre from Long Island University–C.W. Post, she co-created a Suzuki-based performance, Third Child, which toured Italy, the Czech Republic, and New York City. Her recent TV credits include: NEW AMSTERDAM, BULL, Martin Scorsese’s VINYL, JESSICA JONES, and LAW & ORDER: SVU. When she’s not acting on stage or film, Athena facilitates acting classes and conducts theatre workshops in NYC. She proudly collaborates with Heidi Marshall Studio and DreamYard.

Athena is a tremendous coach who will draw out your confidence and (re)energize your work. She has a loving, magic touch with actors. I often partner with Athena in the prep process for actors in screen tests and role prep (e.g., Hallie Bailey is starring as Disney’s live-action Little Mermaid after we walked her through all her intense screen tests!) Actors just adore Athena’s laser-focused, energetic coaching! Her classes are totally invigorating. They’re also super fun and incredibly informative—she brings ALL the insider, behind-the-scenes knowledge from actor to actor…things you’ll really want to know when you head to set! Athena has been around the block on so many TV sets. I really, really love for working artists to teach each other.

Tip! Watch and enjoy the first season of NYPD BLUE. Wow, they broke all kinds of rules with procedurals and in TV format and style! First, they used a feeling of “on the street” cinematography and energy – a hand-held camera feeling. And, importantly, they developed characters fully – including the characters’ flaws. They inspired a whole generation of getting to know the Lead roles, and Series Regulars, in intimate ways.  This show fleshed out characters in the midst of a basic procedural plot and set a tone for how far a character can be explored. Even their guest stars and co-stars had radical importance and humanized totally. All of the roles mattered! Watch.

Hopefully this link will work for you to watch the Pilot… but if not just google it!

Trusting my instincts on camera.

My knee pads story! This was when I realized an actor can always ask for what they need on set to get the work done.

Authenticity. Be yourself! Everyone else is taken.

There is no right way to do a scene.

What frustrates you as an actor in the current climate of filmmaking or of the business at large? How has this affected you directly?

Not enough roles for actors of color. We need diverse characters of different abilities, genders, orientations, and nationalities. The lack of opportunity has often discouraged me and kept me “small.”

The ah-ha moments! Like every time I help an actor break through a scene, or every time I work and can see a genuine connection to the character and circumstances.

I look up to my resilient friends in the business. They are the people you’ll sit next to on the subway, and you don’t know their names, but they are incredibly gifted storytellers who never give up. They’re the artists who decide to keep going despite the odds.

This came at the right time. I’ve been feeling lost and this knocked the rust off and showed me where I still need to improve. Appreciate Athena’s combination of encouragement/positivity and useful feedback.

I love Athena’s spirit! She gave such great instruction on how to approach each role. I really enjoyed my classmates and I liked the small class size.

Working with Athena showed me how much I need a coach – she really has a knack for quickly dissecting a script and pulling something out of it that the majority would overlook at first glance. In this class I got excited about acting again – haven’t felt this way in a looong time!

Overall I think Athena shared positivity and really insightful advice with us that had us all leaving the class more confident and feeling more prepared. This class has come at the right time for me for sure. I’ve been grateful that recently I’ve been getting auditions for roles of varied sized and now I have a way to approach the range of them with much more confidence.

If I can name any shining lights career-wise from this past year, though, one is that I have taken classes with your studio that I might have been too busy or reluctant to step up to! As a result, I have developed SO much more confidence and know-how in front of the camera as an actor–to the point where I am more often ENJOYING prepping and doing the work on camera. I love how Athena shares her real-life expertise as an actor with us, it comes from the heart and from her experience and passion for TV/Film! I felt very supported, and her advice always moved me in a clearer direction–and had a consistency of themes to it so that it can become part of a preparation vocabulary for me.