Bring complexity to your film and TV acting, the same way that you approach Shakespeare.

Using Shakespeare as a guide to being specific, truthful and personal, actors learn to maintain their connection to the moment in any setting—the audition room, a film set, the stage—and to connect to characters deeply while under pressure.

Class size: Limited to 6 students
Prerequisites: Open to all
Location: Online
$159
Non-refundable, but transferable to a friend.

MONDAY
7:00-10:00pm EST
Join Option A
Get on Waitlist
Get Newsletter

Using Shakespeare as a guide to being specific, truthful and personal, actors learn to maintain their connection to the moment in any setting (e.g., the audition room, on a film set, on stage) and to connect to characters deeply while working under pressure.

In class, actors will perform a speech (monologue) of their choice, or they may perform a scene with another actor in the class. Actor’s choice.

The text need not be Shakespeare. Contemporary film or TV speeches/scenes are fine. And, Shakespeare is welcomed of course. Actors will receive direction and coaching.  We will watch and review the work, and look for the moment-to-moment truths.

No previous Shakespeare experience is required. This class is for actors who seek to bring the specificity and complexity of classical texts to the demands of contemporary film and TV work.

You will need to plan for homework time to research your assignment, prepare your materials. All classes are designed to stretch and support your complete prep process as an actor for self-tapes and in-person auditions. The more you put into the class, the more you get out of it!

Rob Clare was originally an actor with the Royal Shakespeare Company (RSC), then a Staff Director at the UK National Theatre, and Associate Artistic Director of the major UK touring company, Compass. Becoming increasingly interested in differing approaches to working with Shakespearean texts, and especially verse, he completed a doctorate in the subject at Oxford University, and has since become an internationally recognized Shakespeare specialist. 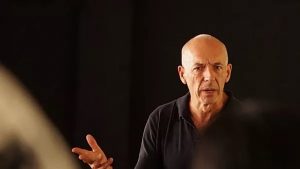 He has worked in numerous training institutions within the UK, including the Central School of Speech and Drama (CSSD), the Guildhall School, Drama Studio London, and the Royal Welsh College of Music and Drama. He directed Rutgers University Mason Gross School of the Arts acting students on a study abroad program at Shakespeare’s Globe. He also established the MA Classical Acting course at CSSD, which he then led for its first three years. Since resuming his freelance career he has directed and/or taught Shakespeare in Ireland, Austria, Germany, Australia, Switzerland, China, and the USA. In India’s National School of Drama, New Delhi, as well as leading Shakespeare workshops, he directed Hindi productions of A Midsummer Night’s Dream, Julius Caesar, and Romeo and Juliet. Before moving to the US, he worked regularly for almost a decade as a freelance specialist verse and text coach with the RSC’s core acting ensemble, leading annual workshops and masterclasses, and working in and alongside rehearsals for productions of Richard III, Richard II, Henry IV Parts 1 and 2, Henry V, and Hamlet.

In the US he has been visiting faculty at UCLA, The Juilliard School, Yale Drama, Brown, USC Los Angeles, CSU Long Beach, CSU Los Angeles, and NYU Tisch (both graduate and undergraduate acting). He has also directed productions of As You Like It (Antaeus Theatre Company, Los Angeles), Cymbeline (New Orleans Shakespeare Festival), Twelfth Night and The Merry Wives of Windsor (American Shakespeare Center, Staunton VA), Love’s Labour’s Lost and Henry IV Parts 1 and 2 (Marin Shakespeare Company), King Lear (Luna Stage, Orange NJ), The Winter’s Tale (Hang A Tale Productions, NYC), As You Like It (Kentucky Shakespeare), Richard III (Idaho Shakespeare Festival), Pericles (USC Los Angeles), The Duchess of Malfi (CSU Long Beach), and Richard III and A Midsummer Night’s Dream (both at the American Academy of Dramatic Arts, Los Angeles). He has worked regularly at the NYC Actors Center, the Academy for Classical Acting in Washington DC, Berg Studios (Los Angeles), and with the acclaimed Steppenwolf Theater Company, Chicago, for whose ensemble he led Shakespeare workshops, and also provided specialized verse and text work for Tina Landau’s production of The Tempest. Work during 2020 includes directing productions of Troilus and Cressida for both Marin Shakespeare Company and for UCLA, for whom he will also be leading an Acting Shakespeare Summer School.

Though still a British citizen, Rob holds a green card enabling him to work freely as a permanent resident in the USA. He is married to the actress Reiko Aylesworth, and they live with their son Andre in Pasadena, CA.

I invited Rob to teach because I have heard from many many actors who have studied Shakespeare with him that it directly impacted their film work! I am fascinated by this. And I’ve seen it work.

Seriously, Rob is one of the world’s top Shakespeare-in-performance experts and is so passionate about the Bard that you will become so pumped to tackle any text given to you: Shakespeare, Game of Thrones, Aaron Sorkin, sitcoms, or any script at all, really.

You will be so lucky to work with this magical (and brilliant) teacher.

You cannot lie to the camera. And no dramatic texts are as layered and expressive as those of Shakespeare.  This can be daunting to the actor, but a better way of looking at them is to see in them unparalleled opportunities and invitations to be specific, and so to be individually creative. If you own the specificity, complexity emerges, confidence and clarity are enhanced, and so is truth. And truth is essential.

I seek to apply Shakespeare’s specificity to screen work. I teach that when we explore layers, conflicts, and open possibilities within a given text, creativity opens up and spontaneity flows. By knowing what to look for and identifying invitations to specificity, we engage with a chosen role and define it afresh. Rather than waiting for a director to get you there, learn to find layers and complexity for yourself. Bring a scene to this class. Let us explore it together. Own it. Test your truth.

Rob is an empathic, curious, intelligent and generous giver of his experience and guidance – the kind of artist you would always want by your side.

Overall the class was amazing. Rob is very knowledgeable and passionate about Shakespeare and I thought he had an excellent intuition about human behavior.

Man, I needed this class. I hadn’t done Shakespeare onstage in about 2 1/2 – 3 years, and this was more than just going back to the gym. Even though I have a decent amount of Shakespeare under my belt, I was grappling with new, eye-opening things Rob was offering in a way that I hadn’t felt since I was a full-time drama student.

I came to class feeling completely out of ideas for moving forward in Shakespeare acting. For example, I’d been working on Isabella from Measure for Measure for years, and one sentence from Rob whirled my mind around, completely unlocking the scene for me. There’s exquisite balance in his teaching between his technical advice and his coaching to find the truth. “Toolkit” is truly an apt name for this class. I came away with very specific assignments for myself and with a great burst of love for Shakespeare that I’d lost along the way a bit.

Rob is a wealth of information, experience, and love of Shakespeare. He’s got much hands on insight to share as well as a brilliant understanding of the language. I would like to keep learning all that he has to offer.

I absolutely loved this class. Rob was a wonderful instructor. His tone of voice, connection to text, insight and understanding, and effectiveness in challenging you to find more was just awesome.

Riz Ahmed, The OA, The Night Of

Rob Clare fundamentally shaped the way I approach acting – disciplined craft allowing us to unleash a sense of visceral freedom. He changed my life.

Rob Clare’s workshops are practical magic. He empowers actors. With tools that will sharpen the novice or refresh the master, a weekend with Rob Clare is more incisive and relevant than a semester of Shakespeare.

Rob Clare has a profoundly intimate relationship with Shakespeare’s characters.  They feel like family.  That closeness combined with some terrific instincts about acting make him an incredibly valuable resource.