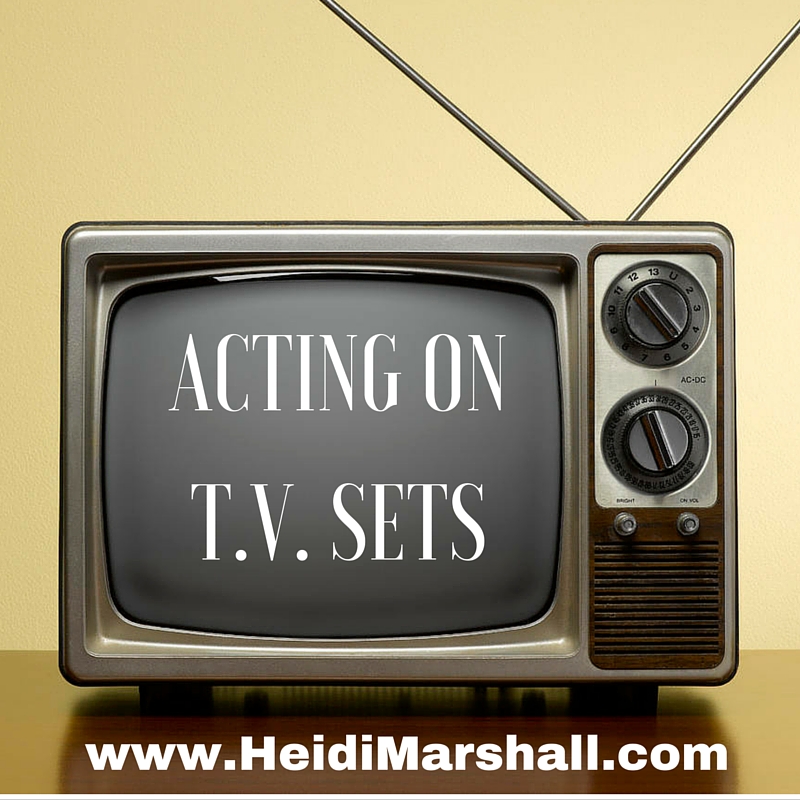 Last week, I shadowed a Director on a Television show.

Like you, I always want to know more about my art form and hone my craft. I enjoy the craft of storytelling so much that I’m always hungry to be in conversation about it with others who are practicing and developing their own crafts.

We learn by observing.

We learn by discussing.

We learn by doing.

I really adored spending time with the Director, the talented Tamra Davis, because she was so open to discussion about the process. (And it never hurts to be inspired as a female director by another female director!)

I encourage you all to pursue time with mentors! It can make the difference of knowledge and inspiration.

Here are my top takeaways that I thought would be most useful to my actor friends.

Here is a step-by-step run down of a typical rehearsal and shooting for one scene.

1 – Actors get a brief blocking rehearsal on the set with the Director. (Ask your questions then!)

2 – Run through the scene maybe 1-2 times for flow with the other actors.
The Director is watching your instincts pop up to see how it might inform the filming or alter blocking.

3 – Run scene for Camera.
Now, the Director of Photography watches you and works out shots with the Director while you run the scene. The Director and DP probably had a plan already, and they are committing to shots.

4 – Run scene again with all the crew watching you and discussing the technical plans.

Note: at this point in the rehearsal process it’s been about 5 times of running through the scene for the actors.

5 – Actors get a break while the crew lights the scene (10-40 mins, depending on the set-up).
This is the time to chill out, focus on the scene ahead, get make-up retouches, etc. How you use this time is up to you. Some actors need to not think about the scene, and others need to intensely focus on what they are about to film.

6 – Filming begins and you have about 2-3 takes per camera angle.

Yes, it’s true that you probably don’t get the personal acting attention you might like on a scene. Rarely, is there talk about character intentions! To move fast with the team, you need to be on your game, totally prepared, alert, focused, ready to roll, ready to play.

The saying is that “TV is a Writer’s medium”. Yes, it sure is! The Head Writer (Show Creator) is the Big Boss.

It makes sense – the Writer sees the overreaching plan of the show. The Writer knows what happens to the characters in the next 7 seasons! So, this means that each script is being crafted as part of a big arc. Typically, one of the Writers (the episode’s Writer or the Head Writer) will be on set sitting beside the Director. The Writer’s job on set is to make sure that the plot details are clear, that the actor is always true to character, and if it’s comedy, that jokes are “gotten”. The Writer is sitting on the shoulder of the Director for every take.

Tamra Davis shared that she’s learned that writers are crucial to the process in TV because they simply know more about the show than the Director. Sometimes you might be given an acting note by the Director…and you will never know… but maybe it came from the Writer!

If you are being asked to deliver a line a specific way, there is a big picture that someone is trying to fulfill. Keep your chin up with the notes you are given and if you embrace a sense of playfulness with the feedback, you will just keep flowing!

This was the mantra that the Director of Photography would literally walk around saying aloud. How do I make this better? How brilliant! He is asking himself, how can I do this moment even better? How can I make it more special or more perfect or more interesting? Wow. Isn’t that a beautiful mantra?

Working in T.V. is also about keeping it fresh and alive while you move fast. Being conscious of your process while moving fast is going to keep your eye on the craft versus just moving fast.

Try muttering this under your breath after each Take that you do. How do I make this better?

4. While filming, stay in the scene even when you trip up lines.

One actor kept messing up his lines in the middle of a long speech. He never stopped the scene, which would have caused them to cut. To the contrary, quite fluidly, this actor would simply back up a few lines and restart the scene from the point he was messing up – the Director never called “cut”. It was great to watch – an actor was totally in control and aware and really not getting tripped up psychologically when messing up. Instead, the actor kept moving forward in fluid motion and kept the scene alive.

So when you mess up during a take, feel free to back up a line and go again at it. They will edit around it. Besides, on the next take, you can get it right! (Don’t worry, the Script Supervisor and Writer will be there to make sure you get your lines right. 🙂

Okay these quick tips should get you rolling with some more ease while you are working on the crackling fast Television sets!

Please, add any additional tips that you’ve learned below from your own first-hand experience! Your insights are treasures!