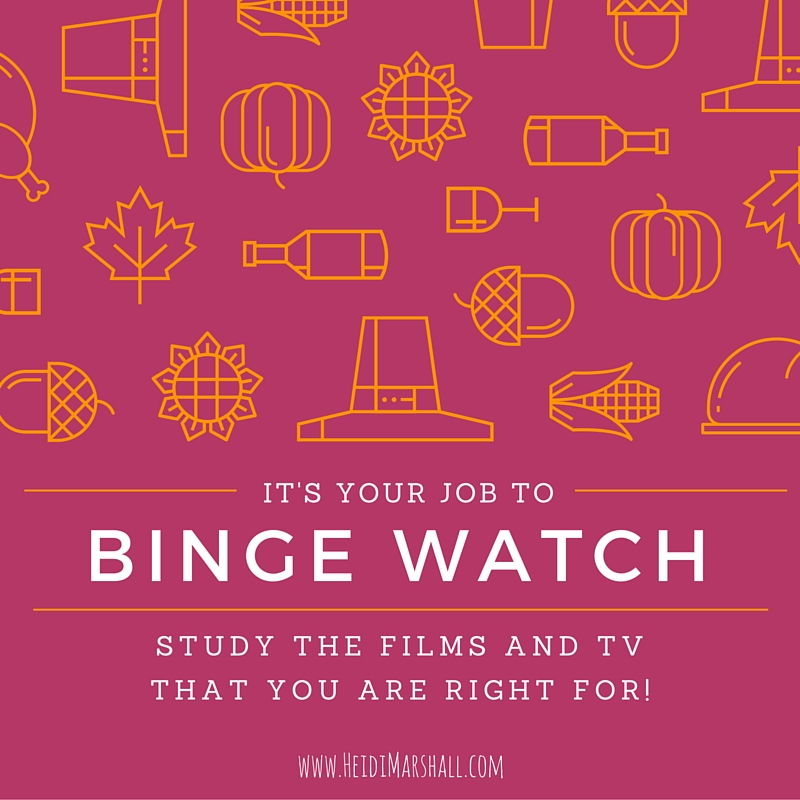 This is one of my favorite Blogs each year.  I re-release it when the holidays start rolling out! (So forgive the dated references, but add your favorite current shows in the comments!)

YOU ARE REQUIRED TO VEG OUT IN FRONT OF THE T.V.

While you are at home taking some precious moments to relax during the holiday season, I want to give you permission to totally hit that T.V. stupor.

Did you know that if you’re an actor who wants to work, or is already working in T.V. & Film, it’s your responsibility to watch current shows and films?  How cool is that!  (And it can also be a tax deduction!)

In my classes, one of the first revelations that actors often have is “oh wow, I don’t actually watch enough TV and Film!”

It’s almost like we think of it as a guilty pleasure. When in fact, it is an essential knowledge base for your line of work.

UPDATE YOURSELF SO YOU CAN TALK SHOP

How current are you?

What’s the latest style of comedy, for example. Is it The Office or Friends? Oh silly Heidi, those are old shows! Okay. So, do you know High Maintenance, Crazy Ex-Girlfriend, Broad City (still going!) Have you watched Master of None?  Will you be ready for the style of these shows when you get that audition?

Wouldn’t it be wise to know what is actually filming locally? Study those locally produced shows because the odds of you actually getting an audition for them are already greater!

Go here for a pretty darn thorough list of ALL SHOWS CASTING IN NYC.

For example, “I’m like Gal Gadot and my agent is selling me as a similar type to all the casting directors.” (And I bet most of you don’t know who she is by name yet, but industry folks do, and you will very very soon… Look her up.)

Who are the brilliant “working” actors that might not (yet) be the household name but you are similar to and everyone knows them? Can you say Ben Mendhelsohn? (WOW. Look him up and watch ALL of his work for a real lesson.)

Study the artistry of colleagues. Look for your mentors. Look for the ones that you can possibly carve a similar path to in the biz.

CHECK OUT ALL THE MEDIUMS THAT YOU CAN

Don’t forget about the films too! I love to waddle over to the movie theater on Thanksgiving evening after I eat a ton.

And Webseries!  Who’s watching them?  Just google “top webseries of 2016” and see what’s going on in the totally independent + creative circuit.

A few years ago, I googled for top webseries and found the underground series Broad City. The next year, it was picked up by Comedy Central and I started coaching people for their auditions for the show. It hadn’t aired yet, so we didn’t have a template of style, but the webseries gave us a hint to work with. (Google and explore the world of webseries!)

What took me so long to get hip?

One Thanksgiving I got hooked, addicted to, couldn’t live without, stayed up til 3am to watch….  The Walking Dead.  OMG, I was sucked in on the Pilot. One of the best Pilots I’ve ever seen. (I’m not an actor, but I hope to play a zombie some day.) I spent a whole month watching Seasons 1-4 .  Yeah, I logged a ton of hours on Netflix and my husband bought me the “Darryl” action figure for my Christmas stocking.

You don’t have to go crazy on a series like I did.

But yes, get contemporary. Get hip.

Know what is going on in the industry that you so badly want to work in.

Watching current media will help you be able to speak intelligently about the industry when you go in for your auditions and interviews with agents and casting directors.

LEARN WHAT YOU LIKE AND DISLIKE AND WHERE YOU FIT IN

Don’t try to like everything and think that you are right for casting in ALL shows and film, but instead learn to be judicious about good material and good performances.

Be super specific about where you fit in. Chase THAT. Don’t just chase the general idea of “I want to be a star” or “I want to book T.V.”.

OK, GO & GET STARTED BY KICKING BACK AND WATCHING SOME MOVIES & TV THAT INSPIRE YOU.

Which shows really speak to you? Find them. Discover them.

Relax and enjoy the magic of acting on camera in this holiday season.  (It’s your job.)

AND TELL US BELOW WHICH SHOWS/FILMS ARE YOU FAVORITE?

WHICH ONES SHOULD WE VEG OUT TO?