How to Deal with Actor Panic 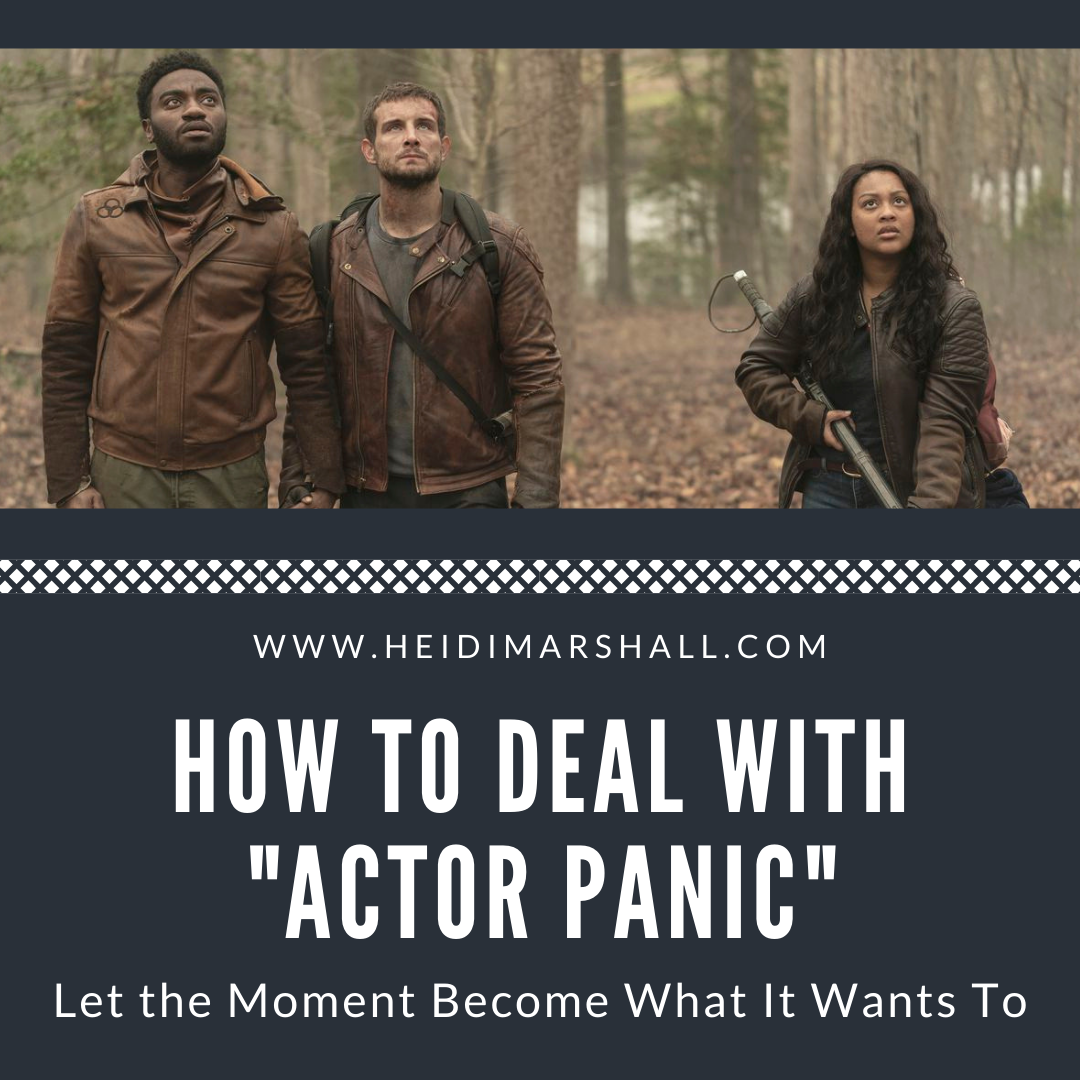 Oh, the roads we journey as we pursue our goals and dreams!

A little while ago, I received a powerful email that spoke to me so deeply on an emotional level. It was a story from an actor who had worked with me in class and then found herself on set confronting a real-world roadblock that so many professional actors experience: feeling blocked as the camera was rolling.

A STORY ABOUT A MOMENT OF “ACTOR PANIC”

Here’s the email that truly moved me:

How’s it going? I wanted to share with you a great experience had just had a couple days ago on a second to final day of shooting for a series on Netflix where something you said to me in class really helped me in a moment of actor panic.

I was just in Calgary, Canada working on this Netflix show that’s now in its second season. We’ve been doing hard nights. On day 6 of shooting for this role, I know that this day is a climactic moment for my character. It’s her last attempt at survival against this episode’s villain who has been antagonizing me through the entire story.

All the days have been fantastic, the crew and especially the director are super actor-friendly. In fact, the director ran the set almost like theater with rehearsal and long shots that allowed us to play a few pages at a time without cutting. It was really great!

Well, now comes this part of the story, and I know “what the moment is” and I do all my homework and everything with the idea that I then need to let it go and play. However, on this day, the idea of knowing that it’s this “climactic moment” really would not leave my head, and I became completely blocked. We did it 3 times and nothing was landing. I wasn’t really hearing anything. I didn’t feel connected or grounded. I was starting to implode. Not in an obvious way to the outside world but internally I was feeling panicked and then panicked about being panicked.

Well, the crew needed about 10 mins to fix some lighting for the shot. And in that time, I went into a corner to breathe and I tried to figure out why I’m feeling blocked.

THEN, I remembered what you said in class to me “Majority of the time if we are feeling blocked it is because we are married to an expectation.” So I really took inventory and realized that I was so keenly aware of the idea of “what this moment is suppose to be” that I am not allowing it to BE whatever it will so that it can BECOME what it wants to.

So, I told myself that it doesn’t NEED to be anything at all. And literally said to myself “Let’s just tell a story! And let’s just see what story that is.” Open curiosity and trust. Like a painting. Throwing it on the canvas and see what it becomes. And with that thought, I immediately connected to myself/character and to the world of the story again and did 4 takes one immediately after the other because the director could tell I was in the zone/flow. It was moment to moment. It felt free, and a story was created in those moments (of course with all the understanding from what preparation was done but NOT clung to during filming).

I just wanted to share that with you. That one little note really helped unlock and unblock me in the 11th hour.

Thank you and I hope all is well!”

LET THE MOMENT BECOME WHAT IT WANTS TO

Wowwwww! I almost cried reading about how this actor was able to empower herself and work her way OUT of feeling blocked, especially when it really counted.

This type of artistic breakthrough is exactly what I dream of for my actors. I was so proud that the actor could think back to the work we did together and allow it to make a difference in her moment of difficulty.

Hearing about this type of progress is what keeps me going! I love supporting my actors every step of the way, through the highs and lows.

This actor remembered to TRUST herself, and I’m so thankful she wrote to me to share this beautiful story.