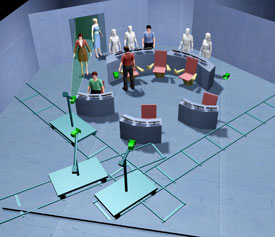 Adapting your acting to camera starts with the physical – how you stage the scene.

If you are a stage creature (started acting in theater before film), then you might have actually experienced one big change when you started auditioning on camera.

You may have felt constrained when you learned you can’t move around freely like in a theater audition. You may have felt like an actor in a straight-jacket. You may actually have been going crazy from the restrictive parameters of working with a camera stuck on a tripod.

You are correct: you can’t run all over the room for your scene in an on-camera audition.

Here are the known parameters for blocking in on-camera auditions:

You probably are aware of those constraints already.

But here’s what I’m betting you’re NOT doing:

Are you preparing your audition by blocking the scene as if you’re actually in reality?

Do you know how your scene actually plays in the “real” world of the film?

Acting (and auditioning) on camera is in the details.

If you don’t pay attention to the details of the scene, then it will look like an actor making vague non-specific choices.  You want to create the full illusion of you actually being inside the car, at the diner, robbing a store, eating fried chicken, or analyzing a patient’s head wound.

Actors are in the business of suspending the audience’s disbelief.

The audition is not only a necessary place to practice creating the full illusion of your character’s world, but it is also a perfect place to practice what you might actually be doing on the sets.  Yes, you will probably be faking it on set too!

On the set, you might be acting with green screen and puppets (because the dinosaurs get added later in CGI).

On the set, you might be acting with a Production Assistant who is standing in for Tom Cruise while we film your lines.

On the set, you will have to totally just imagine the knife coming at you in the horror film in your close up.

On the set, you will have to bend over “as if” you just got kicked in the belly.

3 steps to create the most specific audition of your career.

1. FULLY BLOCK THE AUDITION SCENE IN YOUR PREP

Stage the scene in your home. Completely walk through every moment of the scene. Put the scene in space. Sit at your kitchen table as if it’s a bar. Set up your chairs like it’s a car. Talk on a phone. Cut the vegetables. Be in the operating room.  Be in the courtroom. If your character is in a courtroom, put every single person inside your living room with you when you stage it to recreate the courtroom.

2. ADJUST STAGING FOR A NON-MOVING CAMERA

After you have fully staged it, pick one place for the camera to be positioned that is only focused on you. The camera can’t move in an audition. So now you have to adjust what you are doing to a static camera on a tripod. But, still keep the details in what you staged.

After you have picked the best position for the camera that mainly focuses on your front face, put the other character(s) that you are talking to off-camera (to the right or left of the camera and at the same eye level as the camera itself).

Then, sit or stand in one place. Stay in the contained 3×3 area (estimated tight space). See how many of the details from your original free-form staging that you can keep in the one locked down position that you are now in.

Still pretend like you’re inside the MAC truck. If you’re chasing the zombie, still stand in one place but really see the zombie and actually do the physical struggle with it.  Now, because you have to stay in one place, you just can’t move out of frame and you don’t have anyone to actually touch and struggle against. (You can’t touch the reader.) BUT you can still go through the motions in the direction of your scene partner AS IF you are struggling/slapping/biting/kissing the other character. REMEMBER FOR SELF-TAPES: don’t shoot this in a wide shot, but instead shoot it from the waist up.

PROPS. If your scene has prop action, include it! When you’re at home, feel free to use the basic actual props. Food, phones, laptops, papers, books, etc are basic items you would have at home, so go ahead and include them. However, when you’re actually filming, the computer isn’t even really in the frame. But you should be doing the activity of typing on a computer! So, the scene includes a prop that you don’t have at home or in your bag at the audition, OR it would just seem too silly to actually use and be too distracting, then simply mime it and commit to it. Include that detail in the scene.

Commit to the activity of the prop, and your viewer will believe it… and it will inform your character beats for sure.

Basically, work hard to keep as many details in your staging (in your constricted area) as if you were doing the scene on a set or in the “real” world.

3. WATCH IT BACK AND ADJUST AGAIN

Film your audition scene with your phone in one locked position and then WATCH IT BACK.

When you watch it back, you’ll immediately notice what is not specific and looks odd. You’ll notice if you’re looking too far off camera, if the zombie seems like it is really there or not, if it looks like you are really doing a surgery.  Are your actions clearly suggesting slaps and pushes?  If the MAC truck is driving on the highway, does it look like you are really paying attention to the road?

Do all this before the audition and then you will be the most specific actor that walks through their doors all day. (I guarantee that most actors haven’t worked it all out this carefully before an audition!)

Your physical and extremely specific blocking of the scenes will make you shine like the nuanced actor that you are.