The Art of the Nuance (Part 1) 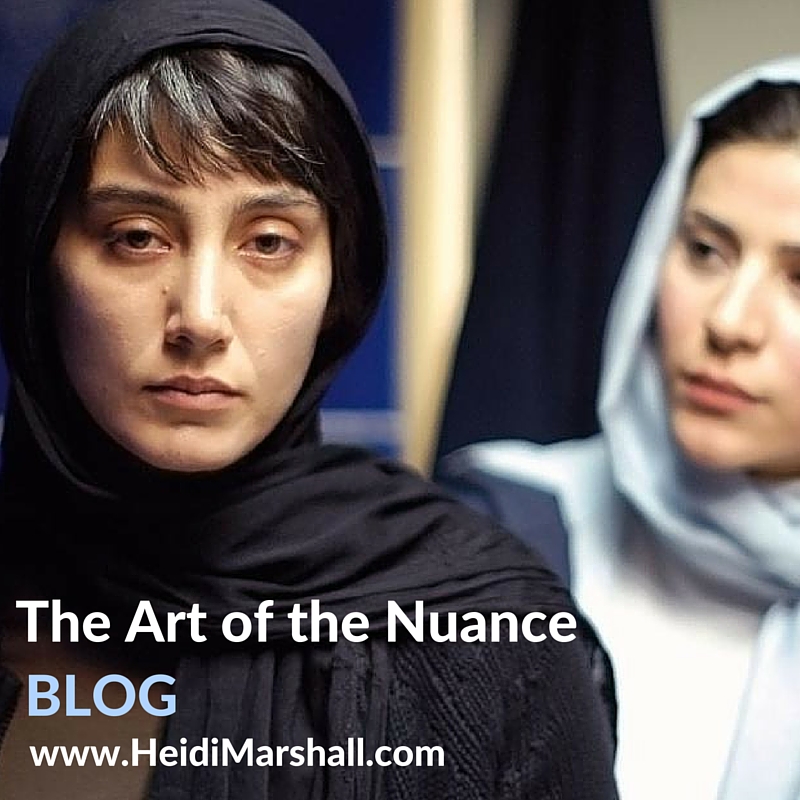 A big part of working on camera is developing your own sense of what the camera and the filmmakers look for when they are telling their stories.

The filmmaker is looking for the tiniest details in your performances to tell their stories.

When I’m teaching acting on camera, I ask the students to watch the monitor intensely in order to develop their own critical eye of performance. This begins the practice of ‘seeing what the camera sees’.

Nuance: a subtle difference in or shade of meaning, expression, or sound.

The first thing that actors notice when watching each other work on camera is the power of the nuance. “Wow,” they say, “I can really see the person thinking in that moment”, or “I can feel the submerged emotions that are brimming at the surface!”

This is nuance that they are watching.

Develop your eye to see the art of nuance in actors working on camera in order to strengthen your own work as an actor/director/writer.

It’s amazing to me how many actors don’t actually watch tons of films or TV in order to develop their aesthetic sense of how the camera captures performance. I know we are all so busy, but the only way to truly learn it is by doing and watching others work. And it’s fun homework!

THE ART OF THE NUANCE: PART 1 TIP

Watch movies and television that use nuanced acting as an important storytelling device – not just fast edits or cool special effects in big blockbuster films. Study how films explore the emotional life of characters in a visual way instead of just in dialogue.

These types of films will give you the greatest insight to the art of nuance on screen.

STUDY NUANCE IN THIS MOVIE

I just saw a brilliant film that is a masterful exploration of nuance to recommend!

FIREWORKS WEDNESDAY by Asghar Farhadi.  Farhadi, an Iranian filmmaker who won an Oscar for A Separation, has become one of my favorite film directors and continually blows me away (and deeply moves me) with his attention to emotional detail. His stories completely rely on the internal nuances of his actors to reveal the human condition so powerfully. To watch his film is a lesson in the art of creating nuance (as actor and director).

Pull back layer after layer of a character’s complexity in each moment.

Farhadi is brilliant at revealing what is buried beneath the surface in his characters. He peels it all back layer after layer, bit by bit, moment by moment, scene by scene. Every film of his tears me up and twists my insides with the pains of the characters. I marvel at how he achieves this with so little dialogue and very precisely staged moments.

He will show a character alone in a room and we will know the pain or confusion that person is feeling. Or he will edit a dialogue scene so that we watch the listener instead of the speaker – and our hearts break with the information that the listener is receiving as we watch her face crumble.

His actors must have a really strong emotional and very specific life to help Farhadi tell the stories in his nuanced style. There is no moment that can not be fully explored by an actor.

So, my TIP OF THE DAY, for your acting growth, is to start to study how filmmakers rely on the emotional nuances of actors to fully tell a story.

FILMS WITH NUANCED PERFORMANCES TO STUDY

Please add more films that feature nuanced performances in the comments section below!

KEEP READING MY FOLLOW-UP TO THIS BLOG POST: THE ART OF THE NUANCE (PART 2) – HOW TO ACT IT